Gay Pride in San Francisco is a time where everyone comes out and celebrates diversity.  GLBT and heterosexual people from all nationalities and all races join in the festivities.  Young, old, families, singles, rich, poor, all are welcome.

Comments Off on Scenes from San Francisco’s Gay Pride, 2011

Bay to Breakers: The Event 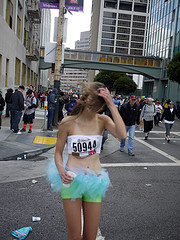 Bay to Breakers is definitely something you have to experience to believe. It has to be the largest costume party in the world. Thousands and thousands (55,000 plus) showed up to run and walk their way across the city from the bay to the ocean. Costumes included Angry Birds, I’m with Charlie Sheen girlfriends, underwear gnomes and regular gnomes, witches, Scooby Do, Napoleon Dynamite, fairies, etc. It is so San Francisco, and absolutely fabulous. Happy 100th anniversary to the Bay to Breakers 12K race.

Comments Off on Bay to Breakers: The Event

It is finally here. The 100th anniversary of Bay to Breakers will be this Sunday from 7:00 a.m. to 11:30 p.m. This is a 12k race from the San Francisco Bay to the ocean breakers, and it was established as a way to raise the city’s spirits after the tragic 1906 earthquake and fire. It is the oldest foot race in the world that has never changed its course. During W.W. II, attendance dropped to below 50 participants, but it has continued to grow. This year they are expecting 55,000 registered entrants and an untold number of bandits who “crash” the race. In 1986, the race had 110,000 participants, enough to make into the Guinness Book of World Records as the largest footrace in the world.

This is not your mother’s footrace. Over the years it has evolved with a San Francisco feel and vibe. When you go and view the race tomorrow, don’t be surprised by the large number of runners/walkers/drunk crawlers who are wearing costumes. You may see Egyptian princes, super heroes, pink gorillas, spacemen, and any number of people dressed up. In addition, you may also see those who declined to wear a costume, or a running suit, or anything at all for that matter. Yes, they must be cold.

Comments Off on Bay to Breakers

Every year people flock to the Macy’s store in Union Square to view the real floral displays and breath in the wonderful scents.  To many, this is a ritual that marks the end of winter and the beginning of spring.  This year’s event occurred on March 27th – April 10th, and it included a Zen, rooftop, and enchanted garden.  In addition, the floral designers created a walk through the tropical rainforest.

If you missed this year’s event, don’t worry.  Just keep an eye out for it next year and welcome spring in with a San Francisco tradition that has been around for 65 years.

If you were around Union Square on Saturday, March 26th, you may have found yourself tapping your feet to the sounds of the Persian New Year’s Celebration.  The sound of music and the joy of dance surrounded the Square and made it a welcoming place.

Nowruz, the name for the Persian New Year, means “New Day” and marks the beginning of spring.  It lasts for 13 days and is a time for visiting and large family gatherings.

Below are a list of festivals and events that you may want to mark on your calendar:

Comments Off on San Francisco Festivals of Note