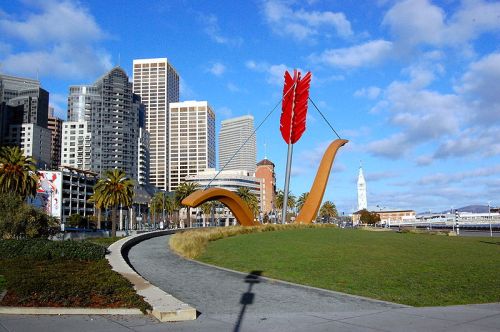 You are walking along the Embarcadero enjoying the views which include the Bay Bridge, Yerba Buena Island, Treasure Island, and far off Oakland; ships are docked in the bay, and a multitude of sail boats are racing all around.  Everything seems nice, laid back, and predictable until…you look up ahead and you see a giant, yes giant, bow and arrow sticking half way up out of the ground.  Surprise!  You have just found Cupid’s Arrow.  (You can check that off the scavenger hunt list.

Designed by the international artists Claus Oldenberg and Coosje Van Brugen’s, “Cupid’s Span” was erected in 2003  in the new Rincon Park on the corner of the Embarcadero & Folsom Street.  These same artists created “Spoonbridge and Cherry” in Minneapolis, and “Saw Sawing” in Japan.  They are worth a “google” to check out the images.

This sculpture consists of fiberglass and steel, and it rises 60 feet out of the ground and covers 140 feet of the 1,000 square foot park.

“These urban pieces are treated like something that’s hit the city,” Oldenburg told The S.F. Chronicle (12/23/2002).  “At first there’s the man-in-the-street opinion, but then there’s the more nuanced response. We don’t copy the objects we use, we try to transform them and we hope they go on transforming as you look at them. The idea of endless public dialogue — visual dialogue — is very important to us.”

Needless to say, their bow and arrow hit the mark as far as public dialogue.  As you walk by this brilliant piece of art, you will often hear tourists and residents talk about it and what it might mean.

As more and more people fall in love with this magical city, this modern-day Atlantis, it should come as no surprise that this is the place that Cupid chooses to keep his bow and arrow.

Comments Off on “Cupid’s Span”

The reclaimed lands are marked in pink.

Everyone who lives in or near San Francisco is very aware of the threat of global warming.  For example, if you talk to someone from Alameda, you realize that they definitely take the prospect of global warming and the rise of the sea seriously.  Alameda, on average, sits only 4 feet above sea level, and any rise of the bay/sea is going to be catastrophic for this historic village positioned on two islands in the bay.

The City of San Francisco also has reason to be alarmed about the sea level.  There are large portions of this city that were reclaimed from the bay.  The founding fathers often used parts of abandoned ships, sand from the tops of hills, and whatever they had in order to fill in the marshes, the inlets, and small creaks near the bay to make more usable land.  In the past, entrepeneurs paid very high prices for land that was actually covered by the bay.  They then would cheaply fill it in and make large profits selling off prime bay front property.  It’s amazing to look at the old maps and realize how much land was actually reclaimed and in use today.  For example, Mission Bay used to be a rather large bay, but now it is just the size of a small creek surrounded by mid-rise apartments/condos, AT&T Park, and the newly developed campus of UCSF.  As the sea level, and bay level, rise, these parts will once again be underwater unless something is done in the next 100 years.

At some point we have to take the blinders off our eyes and admit that global warming is real.  Imagine, there are still people, often brainwashed by their preachers or politicians, who say they don’t believe in global warming.  Is it really that hard to believe when we already see proof around the world of the effect of the polar ice caps melting?  Only when we are able to face this problem head on will we be able to formulate long-term solutions and save the land through the use of levees and dykes.  If they could do it in new Orleans they can do it in San Francisco, but now is the time for action.  Ignorance at times may be bliss, but in this instance it is short-sighted, ludicrous, and dangerous.

Comments Off on Global Warming Threat

I recently celebrated an anniversary.  On the evening of August 22, 2009, I drove into San Francisco and began my love affair with this city.  It had been a long day of driving all the way from Portland, Oregon with a very shaky and upset kitty sitting beside me, stretching across my lap, laying on my shoulders, hiding under the seat, and snuggling up to my legs while I drove for ten hours.  To top it all off, I was stuck in miles of traffic trying to get across the Bay Bridge. We went out to eat at Saint Francis Cafe that evening, and then snuggled in our new loft to watch the stars through the skylights.

There have been ups and downs, trials and rewards, but overall San Francisco has been a great place to live.  It feels like home in a way that I have never felt before.  I am not a visitor here, and I am not out-of-place at all.  This city accepts everyone just they way they are.  I don’t know why anyone would want to leave here.

Here is to 2 years in San Francisco, and a hope and wish for many more to come.

Comments Off on Happy Anniversary