Charles Crocker was one of the “Associates,” also called the “Big Four.”  He shared this title with Collis P. Huntington, Mark Hopkins, and Leland Stanford.  All in someway played a role in the creation of the Central Pacific Railroad, and all of them amassed huge fortunes and built mansions to reflect this on Nob Hill.

Crocker built his opulent Victorian mansion very close to a modest house which stood at the corner of Sacramento and Taylor Street.  This was the residence of Nicholas Yung.  Crocker decided he wanted that lot and began plans to tear it to the ground, but the Yung’s would not sell.  Crocker then decided to build a 40 foot fence around the Yung house on three sides and cut off the air and sunlight.  Eventually Yung did sell, and Crocker tore the residence down.

How did the public feel about this aggressive display of wealth and power?  I think the answer lies in the fact that the 40 foot fence became known as “Crocker’s Crime.”

If you were around Union Square on Saturday, March 26th, you may have found yourself tapping your feet to the sounds of the Persian New Year’s Celebration.  The sound of music and the joy of dance surrounded the Square and made it a welcoming place.

Nowruz, the name for the Persian New Year, means “New Day” and marks the beginning of spring.  It lasts for 13 days and is a time for visiting and large family gatherings.

If you have been in San Francisco for any amount of time, then you found yourself on Brannan Avenue in SOMA.  As with many of the street and building names, it commemorates the life of a man who was once known as “The First San Franciscan.”

Sam Brannan (1819 – 1889) arrived in San Francisco (Yerba Buena) on July 31, 1846, and began to make his fortune.  He was the leader of a group of Mormons who were trying to escape the long arm of the United States and settle a new colony on unclaimed land.  The spirits of his pilgrims plummeted the minute they got off the ship and saw “Old Glory” waving.  Brannan’s response was “There’s that da*ned rag again.”

Sam did not escape the United States, but he did find a place where he could make his fortune.  He took the tithes collected by the Mormons, declined turning them into the main church in Salt Lake City, and instead used the money to start the first newspaper in San Francisco (the California Star).  In addition, he got into real estate and started a trading post.  At one point, he owned one-fifth of the new city.  When the gold rush hit, Sam was there getting his share of the wealth by selling supplies to the 49ers.  All of these things combined helped to make Sam Brannan one of the richest men in California.  He had made it.  When he talked, people listened, and this caused him to be a key player in the development of the First Committee of Vigilance when crime plagued this little city in 1851.  He was a wealthy and respected business man who had the bay area in the palm of his hand.

As Sam became more successful, his alcohol intake increased.  This was not only a private event, but turned public when he attended the dedication of his new hot springs development.  He drunkenly stumbled up to the podium and said, “I will make this the Calistoga of Sarafornia.”

Sam never did get over his need for the bottle, and eventually his wife divorced him and took most of the San Francisco real estate with her.  In the end, Brannan went broke and died a pauper around San Diego.  From rags to riches to rags.

Despite his tragic end, he was definitely one of the founding fathers of San Francisco.  His name lives on around the street that is his namesake.  As you travel the avenue, you will notice apartment buildings, cafes, and other shops with the word Brannan in the title.  111 years after his death, and he still has a presence in this city.  Not bad for a Mormon elder who started out trying to escape the United States in order to establish a new colony.

This photo was taken in an alley off of Van Ness Avenue near Russian Hill.  What was the artist trying to get across by writing this on the wall?  Was it gang related or just an attempt to say something about society?  Is it art?

One interpretation of this is that separation equals death.  Is it that simple?  Maybe it refers to three degrees of separation leading to death.  Maybe the three words represent a severed relationship with an individual’s family, friendship, and relationship which can lead to a spiritual, if not physical, death.

The focus is definitely death because of the placement of the word and how it is the only one capitalized, but what is the purpose of the three “separations?”  Is it significant that the first one is misspelled and different than the other two?  What about the other words (ago, it) that are spelled out in the grid?

Anything that raises this many questions must be a work of art.  Anything that makes an individual stare at it for any amount of time and ponder what it means must be art.  Therefore, this is an example, and maybe even a clever example, of San Francisco street art. 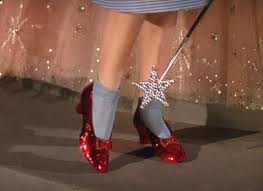 It’s time to put on your ruby red slippers, comb down your mane, or oil up your joints because the Castro Theatre is about to present the Wizard of Oz Sing Along from March 25th – 31st.  If you want to practice ahead of time and need your memory jogged, you will find below a list of some of the more popular songs:

Comments Off on Castro Theatre: Wizard of Oz Sing Along

San Francisco, and California, used to be under Spain’s rule.  During this time, several well known explorers were sent up the coast from San Diego in order to explore this area and chart any features that would make it conducive to settlement and commerce.  Several of these founders are honored in San Francisco in the following ways:

Spain had control of this new land for many years, but lost the West Coast when Mexico became independent in 1821.  It was at this point that Mexican rule came to this part of the country, and a time of relative prosperity began as this area saw more and more settlers.  The then named village of Yerba Buena became part of the United States in the 1840’s as a result of the Mexican/American War.  Shortly after that, the area was renamed San Francisco.

Comments Off on Spanish Footprint in San Francisco

If you are religious during this season of Lent, consider spending some time in Mission Dolores and especially the adjacent gardens and cemetery.  Founded in 1776, the Mission survived many obstacles including the 1906 earthquake.  The structure itself is simple by today’s standards, but very ornate for 1776.  When you visit, you will exit onto the gardens and nearby cemetery.  This cemetery is very old and therefore has very unique graver markers.  It definitely reinforces that fact that “to dust we shall return.”

Comments Off on Mission Dolores Cemetary and Gardens

If you are looking for an authentic 1920’s moving-going experience, then you don’t have to look any farther than the Castro Theatre.  Designed by a self-taught architect named Timothy Pflueger, this is one of the few remaining examples of a “Jazz Age” movie palace.

Unlike other movie houses, the Castro Theatre escaped the deformation and destruction that usually occurs to buildings as they are forced into the modern age.  This is probably due in large part to the fact that it has had the same owners for the last 89 years.  Originally built by the Nasser brothers, sons of Syrian immigrants, the theatre still remains in the protective hands of this family.

What makes it so special?

If you are a movie buff, you need to take the time to visit the Castro Theatre and take in the history.  Breathe in the “Roaring 20’s” and imagine the flappers attending the theater for the first time on the arms of their dapper escorts. 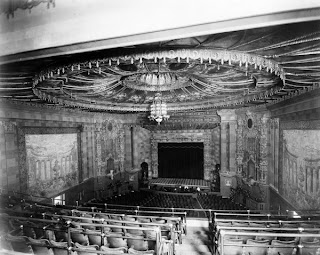 Comments Off on Historical Sunday: The Castro Theatre (1922)

Every once in a while you may hear the expression Barbary Coast.  The perception is that the Barbary Coast applies to all of San Francisco, but in fact, it is a very small nine block area that received this title back in the 1850’s.  It’s boundaries are between Montgomery Street, Washington, Stockton, and Broadway.   The best way to describe the character of this area in the history of San Francisco is with the quote below by Benjamin Lowe in 1876.  The passage is a bit judgmental and rooted in Christian belief, but it does get across a certain picture of what the area was like during this time period.  This particular quote also hints at the anti-Chinese movement,  inflamed by the Christian churches, which was widely spread across the cities of the West Coast.

“The Barbary Coast is the haunt of the low and the vile of every kind. The petty thief, the house burglar, the tramp, the whoremonger, lewd women, cutthroats, murderers, all are found here. Dance-halls and concert-saloons, where blear-eyed men and faded women drink vile liquor, smoke offensive tobacco, engage in vulgar conduct, sing obscene songs and say and do everything to heap upon themselves more degradation, are numerous. Low gambling houses, thronged with riot-loving rowdies, in all stages of intoxication, are there. Opium dens, where heathen Chinese and God-forsaken men and women are sprawled in miscellaneous confusion, disgustingly drowsy or completely overcome, are there. Licentiousness, debauchery, pollution, loathsome disease, insanity from dissipation, misery, poverty, wealth, profanity, blasphemy, and death, are there. And Hell, yawning to receive the putrid mass, is there also.”  – Lights and Shades of San Francisco, by Benjamin Lowe
Sailors who were attracted to the area because of it’s saloons, loose women, drug dens, etc., often woke up the next morning to realize that they had been Shanghaied and on their way to the Orient.  If a ship was scheduled to set sail and there were not enough men to keep it going, it was a common practice to for the captains to stroll through the Barbary Coast area and kidnap some unsuspecting sailor after they had too much to drink or their fill of opium.
The following timeline supplied by Wikipedia will clarify the rest of the history of this historically red light district:

It does make one wonder if in 100 years the current red light districts and crime ridden areas of the Tenderloin and Hunter’s Point won’t be regarded as upscale areas with a notorious past.  Can the city accomplish this task with respect and dignity and without taking away the resident’s Civil Rights?  Time will tell.

Comments Off on Historical Sunday: The Barbary Coast

If you walk by the front of city hall in San Francisco, you can’t help but notice the four images of Atlas surrounding the entrance and holding up the pillars above.  Atlas, as the legend tells, was a Titan who waged war against the Olympians, primarily Zues.  When the Titans lost the war, Zues punished Atlas by making him stand on Gaia (earth) and hold up Uranus (sky) so that they could not embrace.  To this day, Atlas is still holding up the heavens.

San Francisco honors this Titan by placing him on the entrance to one of the most important political buildings in the city.  What type of statement does that make?

Comments Off on Friday Art: Atlas