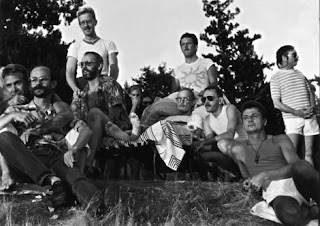 This is a great documentary that really tells the story of what life was like in San Francisco during the 1980’s and the AIDS Crisis.  It talks about not only the sheer number of deaths (over 15,000), but also the political push to take civil rights away from those who where were infected with the HIV virus.  In addition, it details the medical care, the slow response to developing medications, and how many people were infected before they actually had a test, etc.

You will look at San Francisco a little different after you have seen this movie.  You will notice the void that was left by so many people dieing in the prime of their life.

If you don’t live near a theater that is showing it, put it on your Netflix queue.  They plan on making it available later in the year.

Out and About in San Francisco

Comments Off on Out and About in San Francisco

The cable car transformed the way people got around this city in the late 1800’s.  Before these modern marvels appeared on the street, the main transport up the steep hills were horse drawn carriages.  Unfortunately, the horses often felt the sting of the whip as the driver pushed them to strain up these hills with a load of cargo or people in the wagon.  As you can imagine, there were accidents, and some of them fatal, when the horses faltered or were not strong enough to pull the load.

Andrew Hallidie, a Scotsman by birth, immigrated to this country and immediately saw the problem and began to search for a solution.  He didn’t have to look far.  In his profession as a wire rope manufacturer he saw several creative uses for his product, and he began to see how it could be used to transport not only supplies, but people up the steepest hills in San Francisco.

On August 1st, 1873, he gave his first demonstration of the car that would run on a cable system buried just below the surface of the road.  It was a success, and the system grew to include 112 miles of line and became one of the main modes of transportation up Nob Hill, Russian Hill, Telegraph Hill, etc.

The invention of electricity and gas powered engines caused the decline and almost demise of this San Francisco icon, but the people struggled for many years to preserve a piece of this history, and in 1964 the remaining cable car system was declared a National Historic Landmark.  It’s a type of moving museum and a way to actually experience history as you tour the city.

On a recent visit to the Mission Dolores Basilica, I noticed the statue of a black saint that greeted people as they entered the church from a side courtyard.  What really caught my attention was the addition of a real broom which he held in his hands.  Yes, a real broom slipped through the porcelain hands of the statue.  I could have taken it out of his hands and used it to sweep the floor.

According to Wikipedia, his name is Martin de Porres (1579 – 1639), and he was a lay brother for the Dominican order.  He was illegitimately born to a former black slave and a Spanish nobleman.  In 1962, the memory of him was honored by canonization, and he is now know as the patron saint of “mixed-race people and all those seeking interracial harmony.”

Why the broom?  Because he believed that “all work is sacred no matter how menial.”  As with the statute at the Basilica, he is usually accompanied by a cat and a dog which drink out of the same dish.

On a recent outing I came across Grace Cathedral in Nob Hill.  Ever since I read about it in Armistead Maupin’s “More Tales of the City,” I have been curious to see this structure that was the site of such gruesome drama in his novel.  The church itself is very unique and ornate, but the thing that caught my attention are its simple labyrinths.

Grace Cathedral has two meditation labyrinths, one inside made of limestone and one outside made of terrazzo stone.  The mazes are not just unused affectations of the past; they are being used everyday by people trying to calm their mind so that they can truly see themselves and the world around them.  Pilgrims have found comfort and self-awareness though the use of labyrinths from ancient Greece and Rome to present day.  Across many religions, cultures, and eras, there is evidence that people walked the labyrinth.  This is a perfect example of the intersection between history and the modern world.  As I toured the Cathedral, I observed several people walking their way through the paths deep in their own thoughts and meditation.

According to the Cathedral’s website, there are three stages of the meditation walk.  They are listed below:

When you come to San Francisco and find yourself with a gap in your schedule, take some time to visit Grace Cathedral and walk the labyrinth.  If you live here, set aside an hour on a Sunday afternoon, trek up Nob Hill, and perform this simple and ancient ritual.  I hope your time on the path brings you inspiration, guidance, or some new kernel of self-awareness.

On a recent trip to the Midwest, my mom and I decided to go antique shopping.  Conscious of the amount of stuff already packed in my suitcase, I did not hold much hope of finding anything that I could not live without.

In the second store we entered I immediately came across a pack of postcards that drew my interest and made my heart pump fast.  In the middle of Kansas, I had just discovered a bundle of San Francisco postcards from around the 1940’s (my guess based on the cars in the photos).  Unused and still in relatively good condition,  I gladly gave the merchant $16.50 for them and mentally figured out just the spot for them in my already stuffed suitcase.

Some of them are posted below:

Comments Off on Found Photos

Below are a list of festivals and events that you may want to mark on your calendar:

Comments Off on San Francisco Festivals of Note

On Thursday, February 3rd, the 2011 Chinese New Year began.  It is the year of the Rabbit.

Shortly before the New Year in a traditional Chinese home, members arm themselves with brooms and dust rags in order to sweep and clean the house of last year’s bad luck and make room for this year’s good luck which will begin to arrive as the celebration begins.  Some families even put a fresh coat of red paint on the wood frames around doors and windows.  There are many different variations on what happens over the remaining days of the old year, but the culminating event is the big family meal where some type of fish is prepared, and dishes symbolizing prosperity and wealth, such as dumplings,  are served.

There is a myth which states that many, many, many years ago during the New Year, villagers worked hard to fight off a monster known as Nian that would swoop down and eat livestock, crops, and even children.  To appease this beast, they would prepare meals and leave them on the doorstep.  The theory was that if Nian ate the food, he would not eat people or animals.  One year it was noticed that a little child wearing red scared Nian away.  The villagers started displaying red everywhere and using firecrackers to scare him away.  Since that time to today, this ancient creature’s fear of noise and the color red has not allowed him to enter the towns and cities and wreak havoc on the Chinese population.

The next time you go to a Chinese New Year Celebration, take the time to look around at  the displays of red, listen to the firecrackers, watch the children delight in getting lucky coins, and realize that you are in the midst of ancient tradition.

If you drive by sixth and Howard in SOMA (South of Market), you will find an artistic structure that was made out of an abandoned building.  Attached to the sides of this brick apartment, you will see chairs, lamps, sofas, refrigerators, old fashioned bathtubs, a giant armoire and even a grandfather’s clock.  They are firmly attached, but they appear to be in the midst of a great fall.  You will see these items on the fire escapes, window ledges, and sometimes just sitting on the sides of the building.  To add a touch of whimsy, the lamps are turned on at night.  The ground level of the building is boarded up and serves as a venue for street artists to use their talent.

Brian Goggin is the creator of this contemporary piece of art, and it’s name, “Defenestration,” means to throw someone or something out the window.  I could tell you all the different interpretations on the art, but I think it is probably best if you experience it yourself and draw your own conclusions on what it means about our society and the neighborhood in which it resides.

Comments Off on "Defenestration"